A French Sneaker Maker Grapples With How to Bring Production Home

Salomon has built a new shoe factory in France. Now it must also build a footwear supply chain in a country without one. 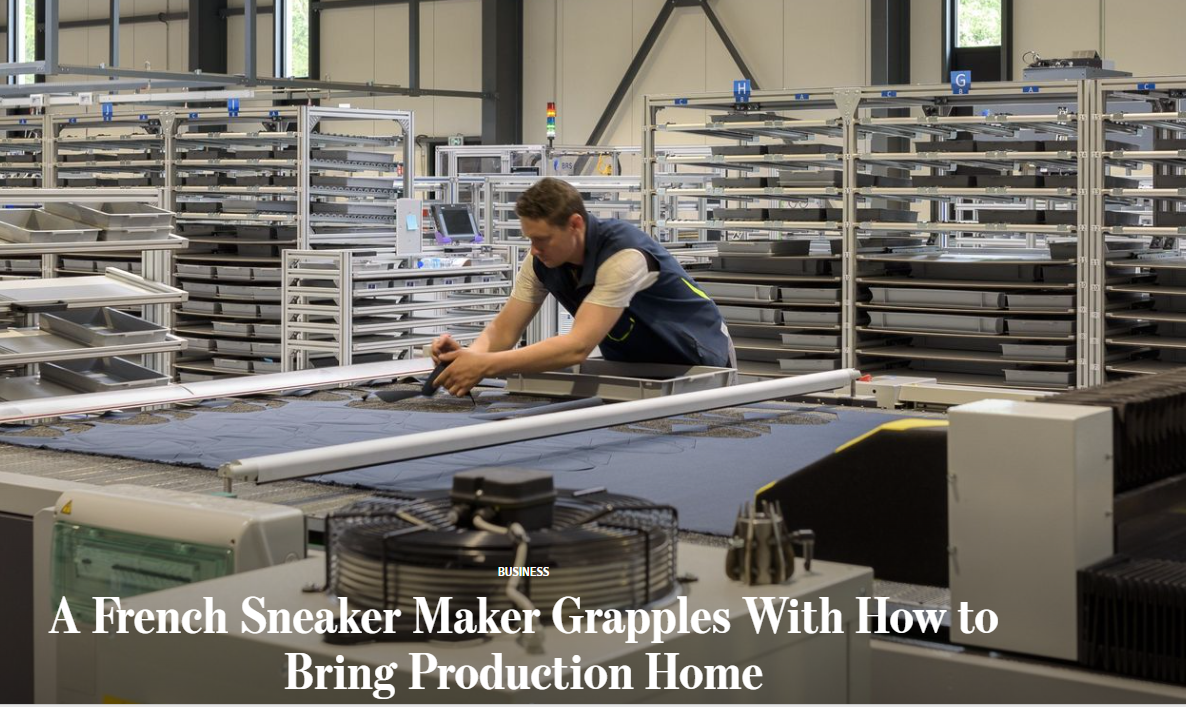 Salomon’s factory in Ardoix, France, will be able to produce one million pairs of shoes a year with just 15 employees a shift, a fraction of the number needed at a traditional facility in Asia.

By Trefor Moss Follow | Photographs by Felix Ledru for The Wall Street Journal May 6, 2022

ARDOIX, France—After 15 years of manufacturing entirely in Asia, French sportswear firm Salomon SAS, eager to cut emissions and reduce bottlenecks, decided it was time to start making its signature sports shoes at home. The challenge, in a country where shoemaking died out years ago, was how to build the necessary supply chain.

The first phase of Salomon’s solution was to build an automated sneaker factory in this small town near the Alps. It also redesigned its shoes, drastically shrinking its supply chain by slashing the number of components in each sneaker by nearly two-thirds. That still left the matter of sourcing materials in a region largely devoid of suppliers. Until now it has sourced soles and other parts primarily from China and Vietnam, two of the main centers of modern shoemaking.

“For 30 years all the innovation, all the capacity in sports footwear has been in Asia,” said Guillaume Meyzenq, vice president for footwear at the 75-year-old company, which also makes skiing equipment and other sportswear. “We have a huge challenge to change how this industry works.” 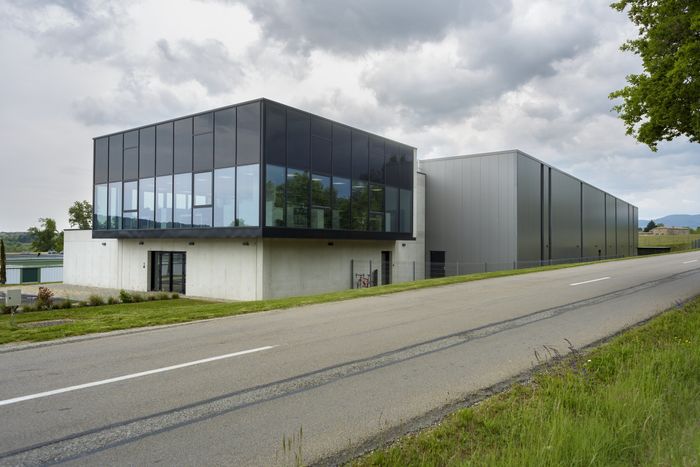 Salomon joined forces with fiber maker Chamatex and two other footwear brands to build a factory in France, where shoe production died out years ago.

For decades, Western companies have made everything from clothes to toys in Asia, Eastern Europe or Latin America, taking advantage of cheaper labor and highly developed supply chains. But the business case for that practice has eroded in recent years amid repeated shocks to the global economy, prompting many companies into a rethink.

Then from 2020 onward the pandemic brought waves of factory closures, as well as port blockages and truck shortages, disrupting supply chains and pushing up freight costs.

These crises have made “re-shoring”—a play on offshoring that refers to the return of production to a company’s home country—increasingly attractive. “Re-shoring used to be a topic for boring conferences; now it’s a topic for the boardroom,” said René Buck, chief executive of BCI Global, a supply-chain consulting firm. “What’s changed is that these disruptions have become a constant.”

Roughly two-thirds of U.S. and European manufacturers say they will bring some of their Asian production home by 2025, with a fifth saying they will bring back most or all of it, according to a survey of 125 companies conducted late last year by BCI.

A robotic laser-cutting system at the Salomon factory, left. An employee at work, right, in process of cutting shoe components.

Footwear production is particularly tricky to repatriate, say consultants and executives, because Asian shoemakers use cheap, plentiful, low-skilled labor. That model can’t be recreated in the West, prompting companies to turn to automation.

Salomon’s Advanced Shoe Factory—a collaboration with local fiber producer Chamatex SA—opened last year and is initially making two types of trail-running and hiking shoes due to hit stores later this year after several delays. The local models are priced at 130 and 160 euros respectively, the equivalent of $142 and $174, in line with Salomon’s existing products. The company is banking on the shoe’s local, sustainable back story being a strong selling point, Mr. Meyzenq said. 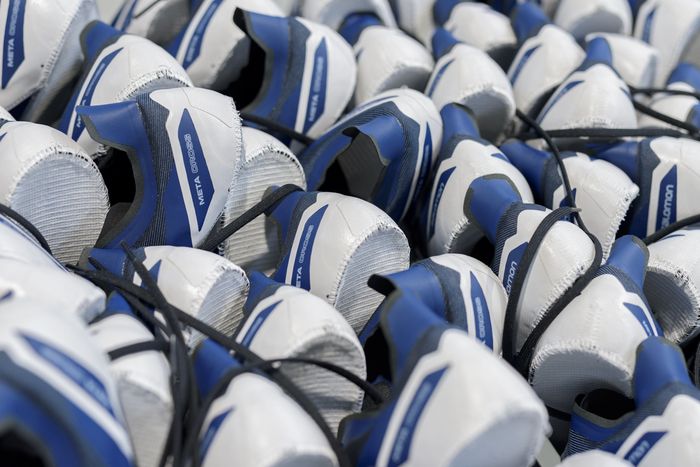 Uppers that have been shaped, awaiting assembly.

The France-made shoes will be as profitable as those made in Asia, Mr. Meyzenq said, thanks to savings from lower transportation costs and the elimination of customs duties.

Salomon is a sought-after brand among serious trail runners, but is niche relative to major sneaker producers such as Adidas. At full tilt, the plant is slated to make one million pairs a year; Salomon will take half of that capacity, and two other French footwear brands, Babolat and Millet, which are also partners in the factory, will take the rest. The partners have invested €10 million, roughly $11 million, in the project so far, with more planned. 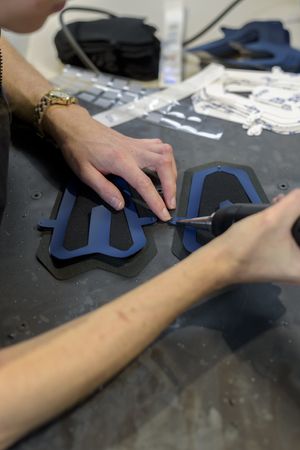 The plant requires 15 human workers a shift; a typical shoe factory in Asia would require five times as many to match its output. Some operate sewing machines—this intricate work is still best done by hand—while others monitor the automated production lines.

One machine uses heat and pressure to stick the sneaker’s upper parts together. Others spray glue onto soles which are then bonded with the rest of the shoe, or use lasers to cut sections of sneaker from colorful plastic sheets. Another stores hundreds of green molds, known as lasts, that are used to give the sneakers their shape.

Salomon, which manufactures shoes in several Asian countries including China, started work on its plan in 2017 as a way to reduce its carbon emissions while also strengthening and shortening its supply chain. The project continued even after the company’s Finnish owner, Amer Sports Oyj, was acquired by China’s Anta Sports Products Ltd. in December 2018.

Other Western sneaker makers have had mixed success with local production.

Adidas AG opened an automated plant in Germany in 2016, and another in Atlanta, Ga., the following year, but by 2020 it had shut both down. The company reverted to its previous model of chiefly making shoes in Asia and South America to be closer to suppliers, and has no plans to try to move production to North America or Europe again, a spokesman said.

By contrast, New Balance Inc. opened a sixth U.S. plant in Methuen, Mass., in March. While the company still makes most of its sneakers outside the U.S., it wanted to meet growing demand for its U.S.-made range, while also building up its resilience against future supply-chain disruption, said Dave Wheeler, the company’s chief operating officer.

“The closer we can have it to our consumer, the better,” said Mr. Wheeler.

Having never stopped making shoes in the U.S., New Balance has a local supply chain capable of providing over 70% of the required parts; the company said it is striving for 100%.

The Boston-based company still imports some key parts, notably soles, from a number of Asian suppliers. “The [local] supply base isn’t as strong as it should be,” Mr. Wheeler said, adding that building it out “takes a lot of time and a lot of money.” The company has been identifying local manufacturers with the skill and machinery to start making footwear components, including working with a maker of bulletproof vests to produce material for the upper section of a sneaker.

In France, Salomon has less to work with. Salomon’s redesigned shoe has 26 parts, down from over 70 in its other models. The sole is a sandwich of five separate layers of rubbery material. The upper shoe comprises 14 parts, including colorful plastic trims and a horseshoe-shaped mesh that forms the sneaker’s body. The tongue is a structure of six layered parts. Shoelaces are the final component.

But only one part is currently being sourced locally—the fiber for the main body of the sneaker, which Chamatex produces in a separate plant next door to the new factory. 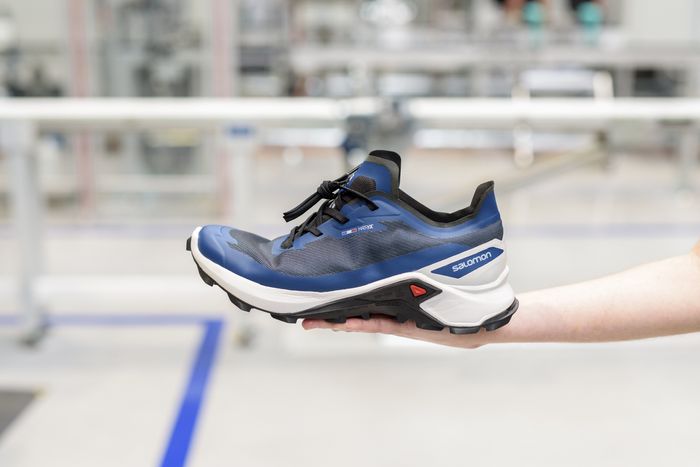 Mr. Meyzenq said getting the shoe plant up and running will be key to convincing suppliers to work with them.

“Now we are going part by part looking for European suppliers,” he said. While there are few footwear suppliers in France, neighboring Italy retains some shoemaking capacity, as do other European countries, and Salomon is already working to identify future partners, Mr. Meyzenq said.

Laces and some other parts can be sourced relatively easily, he said, but others aren’t readily available in Europe. These include soles—a multilayered cushion that is deceptively tricky to make because it must retain its form and springiness through years of use—as well as the specialized plastic sections in the upper shoe. Vietnam is the best source for many of these parts today, according to Mr. Meyzenq.

Developing a local chain for all these components will likely take years, Mr. Meyzenq said. Like New Balance, Salomon will need to identify companies, likely plastics producers, with transferrable skills that can be harnessed for shoe making, he said.

Even so, the plant will start using additional local parts in around 2024 and should eventually rely entirely on European parts, he said.

If the French project is successful, Salomon wants to build a similar automated plant in the U.S. to meet demand there. The aim is for the new plants to meet around a quarter of local demand in the U.S. and Europe, Mr. Meyzenq said.

That will make the company better able to withstand supply-chain disruption, and also meet environmental targets by cutting emissions, he said.

Still, Asia will be the workhorse for the bulk of the company’s global output for the foreseeable future.

“It’s one thing to drive innovation, but you still have to be pragmatic,” said Mr. Meyzenq. “Asia will remain.”

Source: Trefor Moss, Wall Street Journal
Appeared in the May 7, 2022, print edition as 'The Many Steps Needed to Make Shoes Close to Home.'